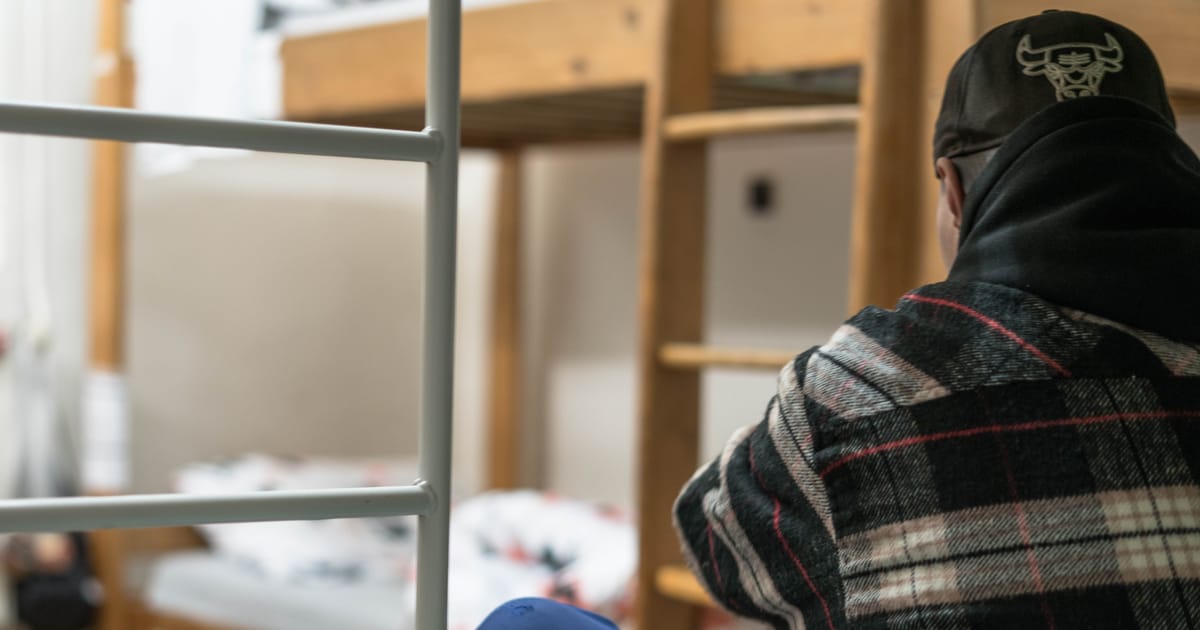 “These hotels really kicked off at the start of the pandemic. And it was the first real attempt to approach this problem from a systemic approach, I would say. Before the creation of these hotels, there was no such type of housing assistance by the town hall.

“In addition, people living in these hotels can benefit from a certain social support. For example, there are social workers who regularly visit these hotels and meet the locals. It means they can effectively work on what they want to focus on, so I think it’s an effective way to help people get out of homelessness.

“These two asylums that the city hall of Prague is working on are really unique, because the other shelters for people in precarious social situations are not managed by the city but by private owners. The latter type of housing is usually the problem, as they charge very high rents and the people who use them cannot apply for social assistance for the rent in these commercial dwellings.

“So these city asylums can really make a difference, but we need to ask councilors to really make sure there is enough capacity for all these people.

Several hundred people have used the hotel offer over the past few years since its inception. Could you explain what is in danger now?

“First of all, I must say that there was an agreement with the town hall that accommodation for the homeless in this form – that is, hotels and hostels originally intended for tourists, but converted to serve as asylums for the homeless, will end in June 2022. What Prague has done is set up two asylums so that these people can be transferred from hotels.

“However, the problem is that these new centers unfortunately do not have sufficient capacity. Currently, we have 60 people who are at risk of being homeless at the end of this month. We think that’s terrible, because they’re very vulnerable. Many of them haven’t had enough time to improve their physical condition, for example, and a return to the streets could have very bad consequences for them.

“Personally, I would also like to say that during this show, I have witnessed the stories of several people who have been homeless for many years and who have found a stable life. Their condition began to improve in several ways. I also think it could be a great waste of the work that has been done in this regard. There was a lot of social work involved in this program that offered help on many levels, from job search to doctors who could help these people with their health issues. So personally I think it would be a big mess if this were to end.

Have you worked in this program yourself? What has been your personal experience?

“Yes. I worked as a social worker for two years and in hotels in particular almost from the beginning. I must say that from my personal experience I have really seen some great stories.

“The hotel run by our organization only houses women and trans people, so the homeless people I met were women. I met several women who had spent a lot, for example 15 years, on the streets Then they got to the hotel and they really started to feel better, they relaxed, they started to work on both their mental and physical conditions.

“It was important because from what I heard from these women, living alone on the streets was a very traumatic experience and so it takes some time to recover from. These women slowly started to recover and then were able to really work on the things they wanted to. For example, some people were interested in getting back to work, while others were seeking treatment for their medical condition.

“Recently, I found out that 71 women have passed through this hotel that we manage. Now there are 34 and 15 women have managed to find their own accommodation, either social apartments or apartments with commercial rents. I also think there are a lot of other things that it leads to that are less clear, for example you can see the mental state of these women improving day by day because they have a safe space and a stable life. I think it is important that this continues and that no one is left behind.

You and several other NGOs have published an open letter in reaction to this situation. Could you explain what you are asking the town hall to do?

“Yes. As you said, we have joined forces with several other organizations such as the Salvation Army or the NGO Nadeje and have written a letter where we call for a more systemic approach to the housing crisis.

“However, we are also saying that at this stage, the most important thing is to find stable accommodation for these 60 people who are at risk of returning to the streets.

“In the longer term, I think the step taken by the Prague City Hall at the start of the pandemic was great and it would be really good to develop it further.

Are you in talks with the authorities of the Prague City Hall? Was there a response?

“So far, it’s still not 100% clear how this will turn out. We have requested meetings with councilors Milena Johnová and Adam Zábranský who focus on social work and housing. However, no meetings has not yet taken place.

“They seem open to it based on what we’ve heard, but we don’t know what the next steps will be. So we would be very happy if they release a statement on this.

“Speaking on behalf of people who live in hotels, I can say that they are currently living in very uncertain circumstances. They also don’t know if there will be room in the asylums that have been set up s ‘they are forced to leave their current rooms.

“For this reason, it would be nice if the town hall could provide a statement and do their best to provide these capacities.”

Speaking to Czech radio last week, housing councilor Adam Zábranský said the town hall is aware of the problem and is considering extending its rental contract with one of the hotels, but will not be able to do so. indefinitely.

A Few Campgrounds Around Colorado That Are Definitely Worth Booking