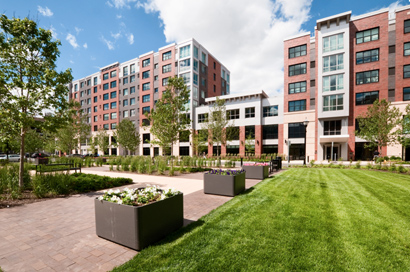 Weehawken hears demand for next phase of estuary redevelopment

Weehawken is currently holding public hearings for an application by redeveloper Hartz Mountain Industries, LLC for a new residential building.

The Weehawken Planning Board received plans for further review at a recent meeting in July for the fourth phase of the Lincoln Harbor estuary redevelopment project. L’Estuaire is an existing residential complex of 589 units consisting of three buildings.

As part of Phase IV, Hartz Mountain is looking to construct a fourth residential building at the corner of Harbor Boulevard and Riverview Terrace.

Plans call for a 223-unit multi-family residential complex to be built on the site of an existing surface parking lot, where construction appears to be ready to begin. The building is designed to blend in with other estuary buildings in the area, each with approximately six stories.

The meetings were held in the second-floor rooms of Weehawken City Hall at 400 Park Avenue. At the July 12 meeting at 7 p.m., council heard further testimony on the matter. However, the request has not yet been approved.

The matter was brought to the September 15 meeting of the Weehawken Planning Board. For more information on this, go to the township’s website at weehawken-nj.us.

In an interview with the Hudson Reporter, Weehawken Mayor Richard Turner outlined the gist of the plans. He noted that instead of the hotel that was planned for the site but later dropped from the redevelopment plan, Hartz Mountain is now only looking to build a residential building there.

The reason for the change came as a result of COVID-19 and township lobbying, among other reasons such as limited shared parking. But now the proposed estuary will feature 223 units compared to about 180 units previously planned.

“I think it was part coronavirus, and part of our lobbying that with shared parking now, we have a lot going on,” Turner previously told the Hudson Reporter. “I don’t know if a hotel will work. So they scrapped the hotel and they’re heading back to the fourth estuary.

Turner applauded the existing complex at 1600 Harbor Boulevard. He added that the new residential building would be a nice addition to the area.

“The estuary turned out to be a wonderful complex,” Turner said. “We have a lot of local people renting there and they are participating in town activities. And it really is a beautiful complex.

Residents wishing to express themselves on the subject can attend the meetings of the town planning council at the town hall. The next meeting is scheduled for September, where Hartz Mountain will continue to review its plans for the venue.

“It’s still ongoing,” Turner said. “They will return to the Planning Council in September.”

With the Estuary project complete and the project at the Atir site under construction, Hartz Mountain has only one site left to redevelop. The parking lot near the Sheraton Hotel in Lincoln Harbor is the last Hartz Mountain-owned site to be redeveloped before officials say the area will be built on.

For updates on this story and others, visit www.hudsonreporter.com and follow us on Twitter @hudson_reporter. Daniel Israel can be reached at [email protected]