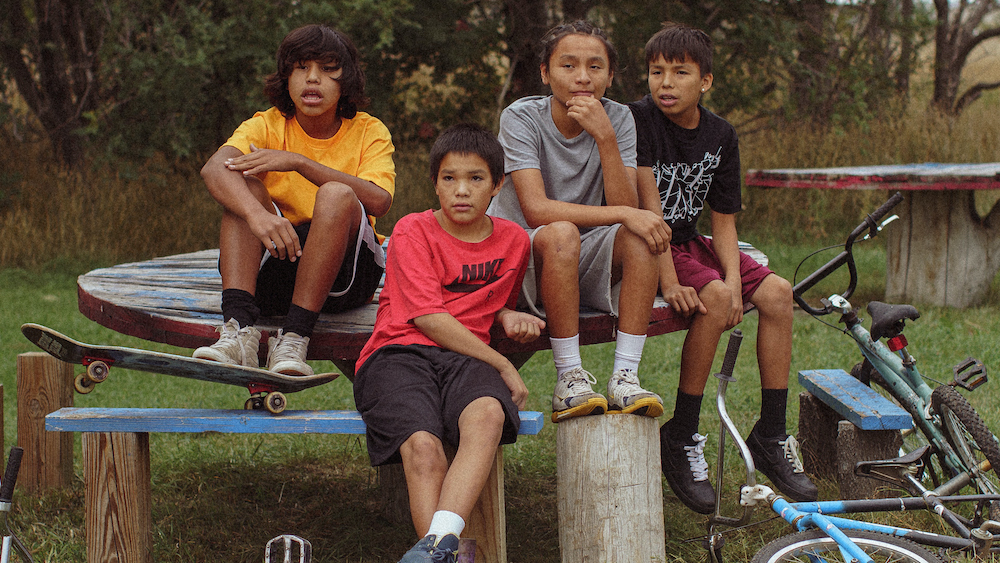 ‘War Pony’ review: Revealing the everyday realities of life on the reservations

If Larry Clark had already found his way to the Pine Ridge reservation, he probably would have come away with a movie like “War Pony,” which observes its young Native American characters jostling, skating, and stealing drugs from otherwise distracted adults. Showcasing such nonjudgmental behavior, first-time directors Gina Gammell and Riley Keough developed this unvarnished portrayal in collaboration with their actors, capturing something both tragic and true about these children, torn between Oglala Lakota and the consumer culture that surrounds them.

A few years older than the hero of Chloé Zhao’s recent “The Rider” – a film this one can’t help but resemble, at least superficially – Bill (Jojo Bapteise Whiting) is like the slacker version of this dreamer American. He siphons gasoline from the tanks of strangers and asks people if they want to buy a stolen PlayStation. He already has two children from two different women. One is in prison, the other does not answer his calls. When Bill discovers a lost poodle in his backyard, he returns it to the owner and finds out what becomes his final stampede: if he can raise $1,000, the dog will be his; he will breed her and sell the puppies for several thousand dollars each.

From age 12 to 20, Matho (Ladainian Crazy Thunder) lives with his father, who is hardly ever home. The boy knows where he hides his stash, chopping the powder with baking soda and selling it to the suckers for a quick buck, which they spend on candy and soda at the convenience store. Such behavior won’t seem all that different from the patterns working-class audiences remember growing up in neighborhoods across America, but that’s not necessarily how audiences think of life on the rez – unless unless you’ve watched other contemporary indie movies made on the subject, like “The Seventh Fire” and “Songs My Brothers Taught Me,” in which case, that’s pretty much exactly what you’d expect.

Boys will be boys wherever they grow up, and Gammell and Keough do an admirable job of balancing this universality with details unique to Bill and Matho’s life – like the feeling of attending a Halloween party where a white male wears face paint and headdress. One afternoon, when he was walking in a hooptie almost twice his age, Bill came across a brand new pick-up truck stopped on the side of the road and suggested that its driver take a stop. The man, Tim (Jesse Schmockel), runs a turkey processing plant in Fall River, and Bill sees a chance to make some money.

The turkey job doesn’t pay much, but Tim takes a liking to the young man and entrusts him with driving the native girls to and from trysts at a nearby hotel. Meanwhile, Tim’s wife, Allison (Ashley Shelton), treats the boy with kindness, the kind one can easily imagine becoming inappropriate, given the chance. As virtually the only outside characters (without reservations) in the film, this couple can be supportive one moment and sleazy the next, representing a lifestyle that Bill and his friends envy, but can’t bring themselves to respect.

“War Pony” spans several months, watching Bill and Matho try to take some form of responsibility, despite the many pressures brought against them. Every once in a while, children come face to face with an adult bison – a sight that connects them to their heritage and the land they live on. In almost every other way they have been co-opted by the outside world, distancing themselves from the native traditions that others practice around them. (A foreground says it all, as Bill drives through town, slumped in his car, blasting hip-hop, while others pass by on horseback.)

As a father, however, he must prepare and provide for his children, lest they end up like Matho, whose father disappears early in the film, after kicking the boy out of his house. There are undoubtedly other inspiring stories to be told about the reserve, but this one feels authentic, lived-in. Plus, she looks great: DP David Gallego has experience working with indigenous subjects (on “Embrace of the Serpent” and “Birds of Passage”). He does not seek the same magical horizons that gave “The Rider” its visual poetry, but he has a formidable eye and a real dynamism. His camera moves constantly, but always with intent, not shaking (for that faux “authenticity” doc) but steadily pushing towards the characters.

Co-leads Bapteise Whiting and Crazy Thunder are solid, magnetic performers in their own right, if not necessarily as compelling as “The Rider” Brady Jandreau or Clark’s “Wassup Rockers” muse Jonathan Velasquez. Amid the ups and downs, the paths of the two characters eventually cross, but not in the way we expected. The moment serves as a reminder that this film is about sharing, as Gammell and Keough — sharing formative experiences that could have been far worse for everyone involved — connect that community to the larger world, and vice versa.