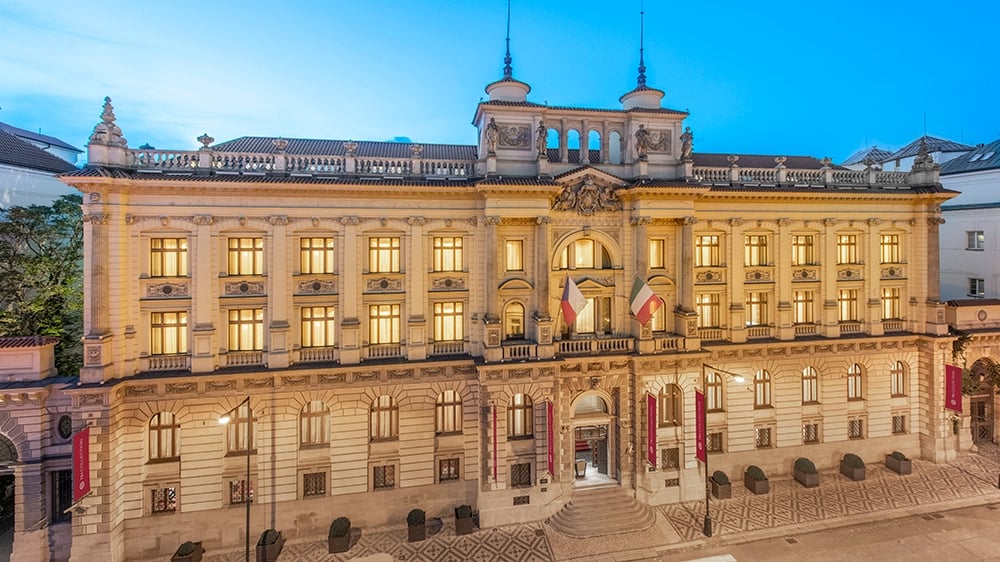 As one of the Czech Republic’s most acclaimed five-star establishments, the lavish Hotel Carlo IV in Prague has always been a beacon for luxury travelers looking to explore one of Europe’s most romantic cities. Once a neo-Renaissance palace, the building was converted into a luxury hotel in 2003, but recently closed to undergo a substantial renovation following a new name change as NH Collection Prague Carlo IV, the high-end expression of range of the NH Hotel Group.

Located just a 10-minute walk from the very heart of Prague, the 152-room hotel was sensitively shaped by the city’s heritage office and an unnamed international architecture studio that has not been detailed online. . The aim here was to adapt the hotel as much as possible to contemporary tastes without disrupting heritage-listed features, while retaining the magic of the opulent lobby which is complemented by high ceilings and wooden floors.

The five-story palace opened in 1890 as the first mortgage bank and this history is largely what informs much of the thematic elements scattered throughout the Hotel Carlo IV, from the lobby now accentuating the cashier’s window to original bank with rich aesthetics. which is embodied in elegant furniture, frescoes on the ceiling and those huge columns that remain unchanged.

After the bank closed, the palace became the headquarters of the local post office for a few years before being later converted to Carlo IV when the building was extended under the direction of Italian architects Maruizio Papiri and Adam T Tihany. This largely explains the panache of Italian style for which this hotel is renowned, but there is a tasteful local sensibility throughout the hotel that has seen the Carlo IV become one of the most sought after in Central Europe.

Given that Prague, like other cities like Budapest and Vienna, is well known for its heritage-listed public baths, it seems foolish to rave about the hotel’s wellness and spa facilities. And yet, the 20-meter-long heated swimming pool and the two whirlpools, in addition to the massage facilities, have become among the most beautiful in the city. It’s not a feat to be taken lightly in a city like Prague, and it’s no surprise that the spa remains relatively untouched by renovation.

The hotel also plans to add a sauna and steam rooms to the spa in the second phase of the renovation later, which will be completed later this year. However, he may not be ready in time for that inevitable summer trip to Europe.

Other modern changes include coworking facilities, a mix of open spaces and intimate corners, and easy access to modern technology in public areas and guest rooms. The lobby bar is also a brand new addition to the venue, designed as a sophisticated cocktail bar with ample space for live music.

The hotel’s restaurant, 1890, is also located just off the lobby and has seen some kitchen changes, serving dishes to share with modern Czech cuisine, which most likely means lots of sirloin and schnitzel.

As for the rooms. Well, it seems that only some of the rooms have undergone substantial changes, most of which are located in the historic wing. The design update sports a similar slight push toward modern conveniences without disrupting heritage features, which is something you’d want if you’re checking into a building as historic as this one anyway.

Check out more photos of Hotel Carlo IV below, taken by Guido Pijper.