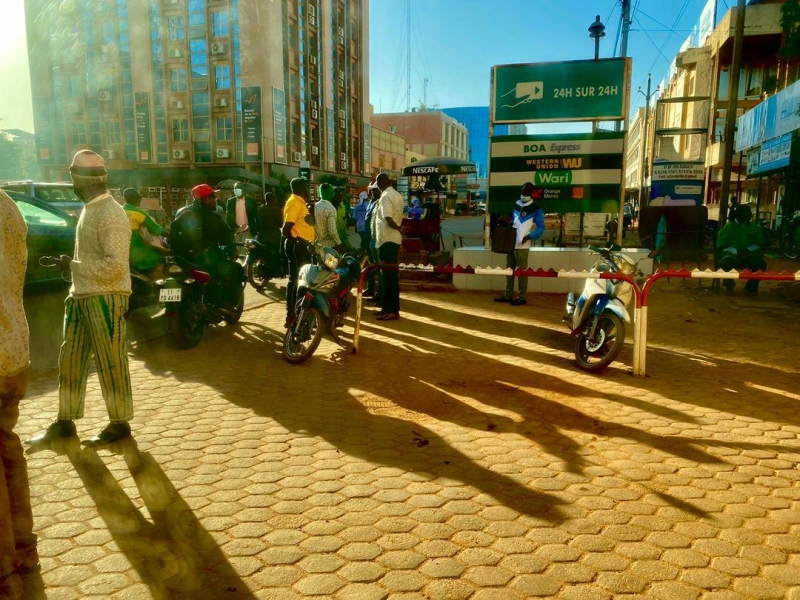 Marching in a Coup in Ouagadougou :: Mmegi Online

By Shelby S. Baugh Last updated Feb 10, 2022
Share
Hot, humid and dusty! These were my first thoughts when we disembarked from the tiny East African airline. French filled the air! The language, the culture. There was a dark tint on the horizon, like a scene in a high-end movie when the protagonist arrives in Africa. It looked like the Africa of the cinema – something from the early 1980s, with women dressed in Ankara and jelly scarves, babies on their backs and bell-bottomed men in blazers. short sleeves, high afros and shiny shoes! There was a romance about it.

There was also an underlying voltage current. We couldn’t quite put our finger on it. Even when we walked out of the airport building (nothing grander than the Sir Seretse Khama airport building) we could tell something was looming. Looking back, I’m sure more attention to news and current affairs would have prepared us for what was to come! When we bought the Moov Africa SIM cards and 5 gigabits of data, we did not expect that they would soon be rendered completely useless, when life would temporarily stop, to look us in the eye, for a recording. It was not easy to find our driver.

Not so when you arrive at airports in cosmopolitan cities like OR Tambo or Jomo Kenyatta, or what I imagine landing in Marrakech, Algiers, Cairo or even Stone Town. It had none of that organized, neat finish, and chauffeurs in gray, navy, or black suits and a white shirt, brandishing your names on shiny signs, waiting to take you to their clean, shiny German machine! No! When we finally found our guy (yes, we found him because we picked him up an hour after we arrived) he was hanging out with the other locals, chatting.

He was out of shoes and the crushed papers bearing our names were tucked away in his pocket. We identified him by the mark on his shirt with the name of the hotel where we were to stay.

If ever a guy was cool, it was him! He was already starting to feel like we had stepped into something that was none of our business and that we didn’t want to participate in, but there we were, lucky to have found him. We introduced ourselves and he walked us to the car, only helping us with our luggage when we got to the car. I let my hair down, hot as it was, and decided on the spot to abandon myself to the city! We were relaxed here. Finally, an hour after finding it, we left why an hour later! Well, he asked us to wait with him for the next group of tourists he was expecting on a flight that hadn’t even landed yet. Despite being tired from traveling for two very long days, we obliged. When in Ouga…! The drive through town from the airport to the hotel was not as pleasant as I am learning now in some cities.

It was a city under construction. The most beautiful buildings I saw were a mosque and a bank. Everything else was gray and brown and dusty, or unfinished, even dazzled by the most colorful string lights. There was something unfinished there. It was like an incomplete thought; like the late Thomas Sankara was about to make the earth as straight as possible before his dream was interrupted. Even as we drove down the driveway to the hotel, on one side was that manicured lawn and gardens and on the other side, in plain sight, was the area where the shrubs from the lawn care were eliminated.

An incomplete thought! If anyone could sit around with it longer, they’d make a plan for the trash can, you know what I mean! I don’t know if I know what I mean though, because in all of this, the overwhelming realization of the diversity of African lives, I was overwhelmed with the understanding that our priorities are very different. I say it all the time, we are not homogeneous. I think, however, that in my internal thinking about Africanness, there has been a lingering obsession with commonalities beyond the agreements reached at the African Union.

Anyway, when we woke up the next morning and tried to go for a walk in the city, and the hotel employees strongly advised against it, that’s when we realized that something really big was going on. Someone told us it was just a strike.

So we thought maybe it was something like the strikes that South African truckers or mail agents have periodically to protest against various economic injustices in the system. So we weren’t too shaken up. Even when an old man of Ghanaian origin entered the restaurant announcing that gunshots had been heard in the morning.

I thought to myself, “Wow! So much drama! I spent this morning trying to call home or to work, in vain, because the network was down. We didn’t think about it at first. I constantly fight with my wifi providers at home, for their unreliability, despite my remote work.

So naturally, I assumed that was it. On the last Monday morning in January 2022, when we went down to the restaurant for breakfast, there was a very drastic change in the atmosphere.

The anguish was palpable, and the quasi-romance of space now felt like an attack. The TVs in the lobby, restaurant, bar, and even the gift shop were tuned to the news.

We weren’t paying much attention until the Ghanaian man from the day before walked into the restaurant and addressed the photographer from the international publication who was just trying to get some sardines and mayonnaise sauce, saying: “Did you hear about the failed coup this morning?” It was only then that we stopped in our tracks, and thought, and so goes the building of another country from West Africa.

Burkina Faso was revolting; and we were going to witness it, whether we liked it or would have preferred to be at home! It was happening! And I couldn’t help but think, “Of course! If I have to visit the African region of my dreams, it must be like a scene from Half of a Yellow Sun, when the Biafra war broke out! I knew it had to be dramatic. I have a flair for it – drama! And oh how dramatic Ouaga was!