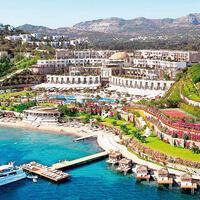 Scam criminal ring made $ 90,000 collecting money on bogus hotel websites, revealed after police operation in which 11 suspects were arrested in the province tourist attraction of MuÄŸla, in the southwest.

â€œTourist establishments have been threatened by cyber gangs in recent years. We reported the situation to the MuÄŸla Provincial Police Headquarters. The operation took almost a year, â€said TunÃ§ Batum, vice-president of the South Aegean Touristic Hoteliers and Operators Association.

â€œAt the end of the operation, 11 people were brought to justice. Two of them were arrested. Another gang member is wanted in the Netherlands, â€he added.

The websites of more than 10 hotels in MuÄŸla have been duplicated by gang members, who have received online payments of nearly 500,000 Turkish Lira ($ 90,000) from vacationers, according to Batum.

The hotel of which Batum is the general manager, the Hilton Dalaman SarÄ±germe, was involved in the case.

â€œMost of the defrauded will be able to get their money back because the gang’s accounts have been frozen,â€ Batum said.

â€œFake websites show up at the top of search pages due to advertisements. We have warned the search engine administrators on several occasions, but it cannot be said that they have taken the necessary action, â€he said.

“This method [of defraud] is called phishing, â€he said, adding that customers should not hesitate to phone hotels if they are suspicious.