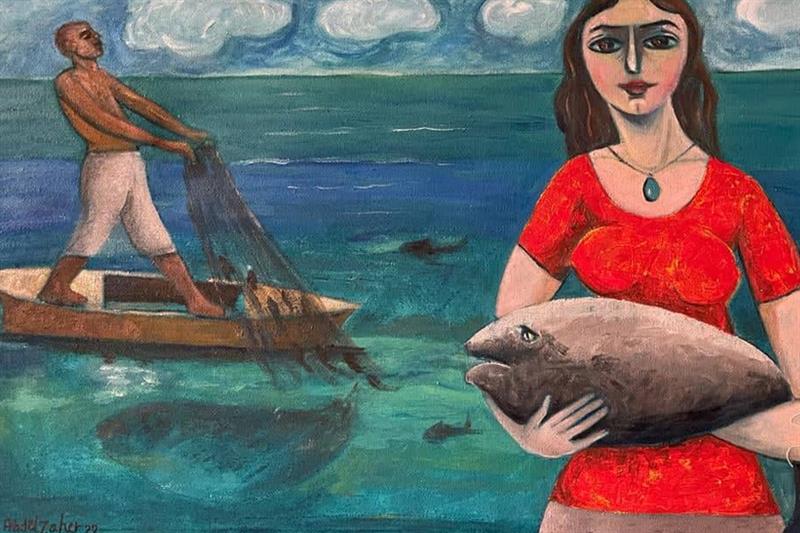 Art workshops, initially the prerogative of the Ministry of Culture, have spread to the private and independent sectors. One such event was the seventh Ostraca International Carnival for Painting (June 24-30), organized by Ostraca, the cultural organization founded by sculptor Mohamed Hemida, and held at the upscale Steinberger Hotel on the Red Dea coast in Hurghada.

Hemida has been organizing cultural events since 2007, when it gave Sharm Al Sheikh its first cultural festival. The word ostraca is an ancient Egyptian term for what would have been a sketchbook, and it was the name he chose for the name of the business he registered in 2016 to organize art events, sometimes with the support of the Ministries of Culture and Tourism. “I wanted to break away from the cultural centralization of the capital and create a hub to help artists from different countries merge and learn new techniques and build friendships,” Hemida told me.

In 2018 in Hurghada, Ostraca brought together 38 sculptors from Egypt and Europe, samples of which are now on permanent display along Hurghada’s tourist promenade and in other parts of the city. “Fortunately, we have good support from local businessmen and the municipality of Hurghada, as they are aware of the role of art in supporting tourism. In recent years, more than 87 sculptures by foreign and Egyptian sculptors have been made to decorate the streets and squares of Hurghada, Sharm El Shiekh and New Cairo. It’s hard work, but it’s fun,” he smiles. “Each festival is a journey during which we enjoy exploring new regions together. Part of the art produced goes to sponsors, the rest is sold to the Ostraca gallery on the tourist promenade.

The current round includes 30 artists, including Mohamed Abdelhady, Omar Gabr, Gehan Seoudi, Heba Amin from Egypt, Abdallah Al Tamimi from Jordan, Mark Butler from Britain, Muberra Bulbul from Turkey and Galina Stetco from Canada, among others. To avoid the heat, the open-air workshop started every day at 5 p.m. and continued until midnight. The theme was open-ended, so some artists represented Hurghada while others took up their own previous interests.

Al Tamimi – who is participating for the first time with an acrylic on canvas – says the event is a good way to develop “creative industries”, the emerging academic field in which he is currently pursuing a doctorate at the University of Minya. “It’s also a good tool to refresh the local economy and connect visual artists to collectors.”

Mohamed Abdelhady’s brilliant 1 x 1.5m mixed media on canvas is a fantastic blend of human and animal figures inspired by the artist’s love of history and myth. Dominated by different shades of blue, the composition of the painting is very particular, dividing the space into small, incoherent regions, each telling a different story. The caricatural style is reminiscent of Persian miniatures.

The fish is an eternal symbol of the origin of life, eroticism and fertility. Two artists represent them. Heba Amin’s 1 x 1 m collage of three generations of women features a flying fish against a dark red background. More realistic, the oil on canvas 1 x 1 m by Omar Abdelzaher shows a woman on the shore in a red blouse holding a huge fish as well as a fisherman in his boat in the middle of the sea.

Influenced by ancient Egyptian history and popular mythology, Gehan Seoudy depicts the very sensual scene of a strong, yellowish ox with a human head, representing strength and wisdom, with the blue form of a refugee woman in his company.

On the last day of the workshop, an exhibition of the completed paintings was open to tourists and the local community. For the rest of the year, six workshops and exhibitions are scheduled by Ostraca, the first in Istanbul in September. As a participant in the workshop, I think it would have been more fruitful if the mornings were devoted to visits and excursions to places such as the Hurghada Museum, to help inspire the artists.

On Saturday July 16, Art D’Egypte organized an event called Art by the Sea on the North Coast beach, featuring the works of four Egyptian artists: Mohamed Banawy, Aly Moustafa, Taha Nasser and Ahmed Hafez. It took us almost five hours to reach the resort location, Masyaf, located in Ras Al Hekma. Eight sculptures and installations are scattered around the grounds of the newly created station, most of them on the themes of summer and leisure.

According to Nadine Abdel Ghafaar, the president of the organization, the goal of the project is to bring art out of its traditional limited enclosure to make it accessible to a different audience. “Our plan is to showcase different artists and trends every summer, with the aim of supporting contemporary Egyptian art and refreshing cultural tourism.”

Between latitude and longitude is the title of a mighty large steel sculpture by Mohamed Banawy. Featuring a network of colored steel panels, is inspired by the nostalgia of places and childhood memories that inhabit our collective memory.

A less elaborate style is Joy on the beach, an equally large stainless steel piece depicting a father carrying his daughter on his shoulders, who in turn happily holds a kite. Taha Nasr’s simply designed piece, all in reddish orange, captures a moment of joy that multiplies in the presence of family.

Aly Mostafa represents a steel bicycle with several tires of different sizes, an impressive imaginary piece placed at the entrance of the village. Pure Waves by Ahmed Hafez, in wood and transparent resin, depicts the magic of the sea, seen by the artist as a powerful source of feelings and a window on human aspirations.

The exhibition, which runs until July 27, is a positive initiative, but requires better planning and higher caliber art work.

*A version of this article appeared in the July 28, 2022 edition of Al-Ahram Weekly.